The team headed by professor Jan Skov Pedersen were one of the very early pioneers in taking advantage of the MetalJet technology within SAXS applications. They managed to optimize the configuration of their system to the extent that they achieved intensity improvement by a stunning 10 000 times over the years!

A SAXS system equipped with a MetalJet source facilitates unique experiments thanks to its world leading brightness.

Before, it took 1-2 hours to measure a sample and today it takes about 10 min and the data quality is significantly better. Measurement times are now so short that it makes sense to automate the sample loading, which really improves throughput. 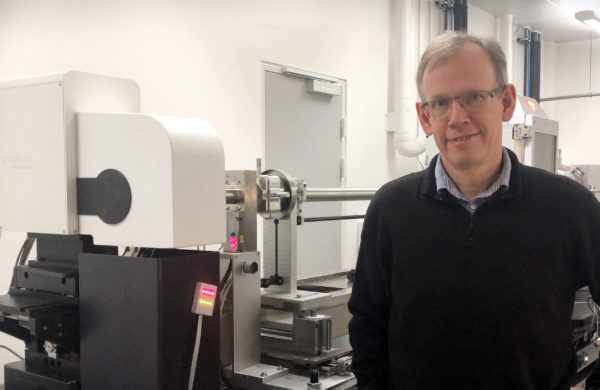 When we meet Professor Jan Skov Petersen he has just ended a few busy days with the 16th Nordic Scattering on Soft Matter meeting hosted at the Department of Chemistry and Interdisciplinary Nanoscience Center (iNANO) in Aarhus. This annual meeting is a great opportunity for the SAXS community to network and immerse in their common interest.

Jan has been at the Chemistry Department at Aarhus University since year 2000 when he came from RSIØ National Laboratory in Denmark. There they were working on materials research and he had predominantly been working with small-angle neutron scattering. At that time he had to build his own small-angle scattering instrument from scratch, which was quite a task, so when he started his new job at Aarhus University he wanted to buy a commercially available instrument and optimize the system for his own research.

Jan is heading a team involved in “Soft Condensed Matter” collaborative projects studying biological and synthetic protein samples, inorganic and synthetic polymers and DNA- and RNA- structures, mostly using solution scattering but it could also be on solid samples as for example bones.

In addition to pursuing their own research in the Soft Condensed Matter group, they have many collaborative projects with researchers from near and afar. The collaboration may include a range of actions, from inviting others to come and train them to use the equipment, to simply receiving the samples and returning results.

Before upgrading their equipment with a MetalJet, they had a typical capacity to measure 3 weakly scattering samples in a day, changing in the morning, at noon and in the afternoon before leaving. Now, they can easily measure more than 20 samples per day facilitated by the MetalJet and the sample handling automation.

The higher X-ray flux enables new types of experiments that were not feasible to do in a laboratory before and we can even do measurements in the time range of seconds and thus be able to repeat it many times to get better statistics.

“It’s so important to be early with the new technology!”

Jan had heard about the Bruker Nanostar SAXS instrument already in the late 1990s from Peter Fratzl, who at that time was at the University of Vienna. At a workshop in Leuven Jan discussed with Bruker how the Nanostar could best be optimized for their SAXS applications. The configuration of the first instrument was optimized by Jan and he used a customized configuration with a high-end detector and a rotating anode X-ray source. This system proved to have approximately a factor of 100 times higher intensity than the Nanostar in Fratzl’s lab, which used a sealed X-ray tube and smaller pinholes. Already in 2010 the team managed to improve their current Nanostar further, by another factor of 10, by installing scatterless slits.

When Jan applied for funding for a second instrument, also configured with a rotating anode and the same hardware, the first application was rejected. Meanwhile Jan had heard about the MetalJet source at a Bruker User Meeting and was very impressed, and he thought that it was a great possibility to include the best possible source available in the new instrument as it would really improve the setup. He applied a second time and updated the application to include the newly developed MetalJet, and this time the application was granted. It was the Carlsberg Foundation that contributed with the extra funding needed to include the MetalJet in the SAXS optimized configuration.

In 2014, after the successful second funding application, they were one of the first labs to get a SAXS system with a MetalJet D2 X-ray source and, sure enough, intensity was improved by another factor of 10. This means that over a four year span they had managed to improve the intensity by 100 times, which was then already an improvement of a 100 times from the Nanostar they first experienced in Vienna. A stunning 10 000 times improvement by Jan and his team!